Presented by the Community Environmental Council

Come to Earth Day 2015 car free, and enter to win prizes! We will be giving away pairs of Amtrak Pacific Surfliner® tickets, and a Grand Prize, round-trip tickets for two including roomette accommodations from Santa Barbara to Portland or Seattle on the Amtrak Coast Starlight® – amazing views and meals included!

How to Come Car Free 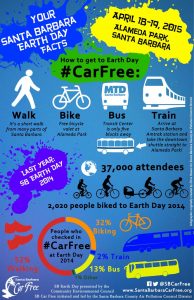 Find a bike route using Traffic Solutions new bike map app for your iPhone or Android phone, or use a PDF copy.  At the festival, you’ll find FREE bike valet near the corner of Anacapa and Micheltorena Streets in Alameda Park, sponsored and run by SB Bike.  As you enter the Park, check in with an Earth Day volunteer to register to win prizes for being car free. Then, stop by the Car Free booth and enjoy the many offerings that are part of the Bike Zone this year.

MTD buses and shuttles stop near the Festival location at Alameda Park, and buses from all over the South Coast, including UCSB, Goleta and Carpinteria, stop at the MTD transit center, only five blocks away. See www.sbmtd.gov or call 963-3366 (answered by MTD staff weekdays 6am-7pm, Saturdays 8am-6pm or Sundays 9am-6pm) for routes and schedules.

Earth Day’s location makes it easy to get to without a car. Alameda Park is only a 30 or 40 minute walk from the Mesa, Upper State Street, or Milpas Street, and can be easily reached from lower downtown and the harbor either entirely on foot or with help from the MTD Downtown/Waterfront shuttle. So lace up your walking shoes and get some exercise while you make this a car-free day!

The Santa Barbara Amtrak train station is conveniently located in the heart of Downtown Santa Barbara, making it easy to travel to the festival, hotels, and restaurants without a car. Simply jump on the electric Downtown shuttle which will take you straight from the train station to Alameda Park where the festival is located. Click here to read about discounts on the Amtrak Pacific Surfliner® and Amtrak Coast Starlight®.  Once in town, you can also show your Amtrak ticket for a #SBCarFreeExperience!

The South Coast Earth Day Festival is presented by the Community Environmental Council.We think of Santa Barbara as the birthplace of Earth Day. See the Earth Day website for more info, and to find out about all the events planned for the weeks before and the Festival Day!

Also see our NEW video on how to get to Earth Day #CarFree:

Hugh Kelly was the Grand Prize Winner of the Earth Day Car Free drawing in 2014, winning a pair of roundtrip tickets to Portland or Seattle on the Amtrak Coast Starlight® – with roomette accommodations and meals included.  Kelly, who biked to Earth Day, is President of the Mesa Harmony Garden, a collaborative volunteer effort to convert unused land to a food forest to grow food and donate it to local organizations that serve people in need, such as the Food Bank.  Kelly embodies the “Local Roots” theme of this year’s Santa Barbara Earth Day, and is actively implementing two key initiatives highlighted this year by the Community Environmental Council, which presents the event: “Drive Less” and “Eat Local.” 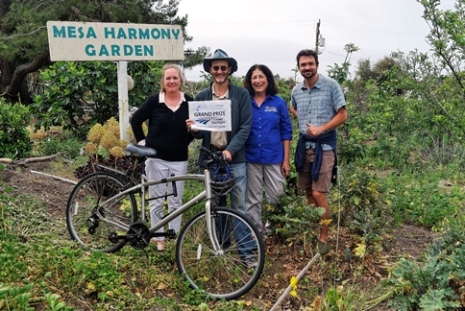 Our News Infographics Videos
In the News